The deposit, a quartz vein-hosted mesothermal lode-gold system with a previously defined historical resource of 260,000 ounces of gold, was still open both down dip and along strike when Tournigan acquired it.

The exploration acreage surrounding the project extended to 844 km² and was itself host to numerous other gold and VMS prospects and targets. The technical team of geologists and resource modelling experts was led by Aurum Founding Director Vaughan Williams, one of the company’s Principal Geologists.

Aurum was tasked with increasing the resource by exploring the mineral potential beyond the area of the known deposit. The Curraghinalt Gold project was sold to Dalradian Resources in 2008 and Aurum’s work continued with the new owners up to late 2011.

Eight years of work programmes planned, executed and overseen by Aurum were fundamental in achieving a ten-fold increase of the gold resource, from 260,000 to 2.69 million ounces (measured, Indicated and Inferred categories).

The Curraghinalt Gold project posed a number of challenges for the Aurum team. The technical aspects included understanding and interpretation of the complex geology and mineralizing system, and designing a multimillion dollar exploration programme that would significantly enhance the gold resource and the overall value of the client’s property.

The logistical aspects covered planning and implementation of the diamond drilling programme, which amounted to 30,000 metres of drilling. Aurum dealt with up to five drill rigs over the eight-year period, managing the field teams and drilling contractors on site and maintaining strict environmental standards and controls on exploration activities.

The project manager also had to ensure that the geological samples collected and sent for assay met the stringent quality assurance and quality control standards required for developing an NI 43-101 quoted gold resource.

Aurum operated an eight-person geological team to execute the project exploration and development between 2003 and 2011. This work had two distinct areas of operation: developing the resource at Curraghinalt; and carrying out regional exploration across the wider licence block, focussing both on developing prospects with known mineralization and on regional grass roots exploration.

The work also involved the oversight of two drilling contractors, operating five drill rigs and comprising up to twenty staff. Just as important was building and maintaining good working relationships with both the local residents and the wider community in the project area, over the eight years of Aurum’s involvement with the project.

The exploration aspect yielded numerous gold and base metal targets for development across the licenced area. Entirely new prospects were also identified. These added an increased value to the project, from both resource and advanced exploration perspectives. 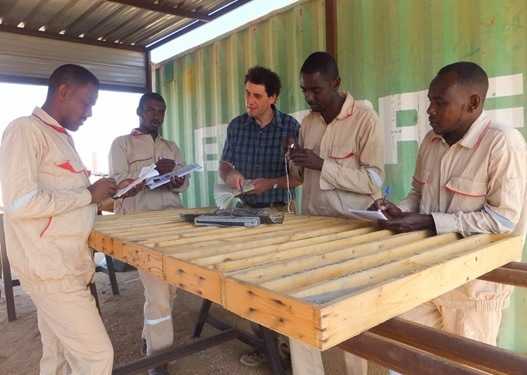 Aurum spent 2015 working on an exploration strategy covering 2500 sq. km on Block 78 for Kambal International. The Kambal licence is in Eastern Sudan adjacent to the Eritrean Border 120km north of the city of Kassala. The area has huge potential for gold and is heavily worked by local artisanal miners in many locations.

During 2015 Aurum planned and supervised a series of exploration programmes developing targets across the block this included mapping, prospecting and trenching at six of the best localities prior to planning and executing a 3,700m drilling programme characterising the styles of mineralization seen at each of the localities. Whilst most of the mineralization relates to orogenic lode gold systems we are also on the lookout for VMS zones with surficial gold rich gossans.

The work has continued into 2016 where Vaughan Williams spent most of February initially out at camp working with the local technical team and then in Khartoum where he attended the Sudan International Mining Business Forum & Exhibition flying the flag for Aurum over three days at both the conference as a speaker and also the exhibitors’ hall. He was also chosen as one of five delegates to be taken to the Sudan Parliament building to form part of a delegation to make representations to the Parliamentary Sub-committee for Mining.